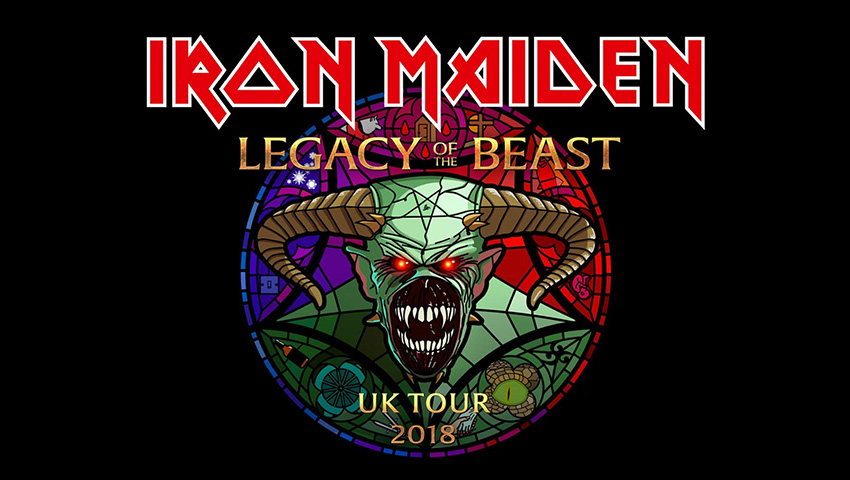 Posted at 19:41h in Iron Maiden, Tour by WebmasterCruz

Iron Maiden have kicked off their latest tour in Scandinavia this week. The 35-date Legacy Of The Beast tour – the concept of which is inspired by the band’s mobile game and comic book of the same name – will hit the UK on July 31 and features their most ambitious stage production to date.

Kerrang! caught the band at Helsinki’s Hartwall Arena on May 28 and learned a lot during their explosive two-hour set…

1. THERE’S HIGH DRAMA FROM THE OFF!
Iron Maiden’s set is a sheer spectacle from the very moment they bound on stage to opener Aces High. A 33’ wide Spitfire replica, complete with a propeller and flashing lights, swoops over the band and strafes the fans at the lip of stage. At the song’s climax, the aircraft dives behind the wall of amps and crashes to the ground. Sure, you could save a jaw-dropping moment like this for the end of the show, but Iron Maiden tend to do things a little differently.

2. THE SET LIST IS IMPECCABLE
As the tour name suggests, The Legacy Of The Beast features a carefully-curated historic set list, cherry-picking highlights from their 38-year recording career and offers something of a thematic thread throughout the show. The first third of the show has a military flavour, complete with stagehands dressed in combat fatigues, who occasionally appear to remove parts of the stage dressing. The one-two of Aces High and Where Eagles Dare – a tale of daring parachute raid to rescue U.S. soldiers from a German army base in the Bavarian mountains – is followed by 2 Minutes To Midnight (nuclear war), The Clansman (“a song about someone who wasn’t free and decided to do something about it,” remarks frontman Bruce Dickinson) and The Trooper (a song based on the Charge of the Light Brigade during the Crimean War). So, part one: war. Got that? Good.

3. THE VENUE TRANSFORMS INTO A CHURCH
The stage plunges into darkness as roadies ready the stage for the second act. There’s ominous rumblings and clanking before the lights go up to reveal a magnificent church chancel, with stained glass windows featuring chapters from band mascot Eddie’s life. It’s a truly breathtaking moment. You’ve got images from The Trooper, Seventh Son Of A Seventh Son, The Number Of The Beast and Powerslave releases flanking an ornate centrepiece. Eagle-eyed fans will be able to spot the crest of a certain East London football team too. The church setting remains during the second part of the set which features Revelations, For The Greater Good of God, The Wicker Man and the epic Sign Of The Cross, an X Factor album track that has not been performed since 2001.